We hope you are well as summer vacations wind to a close and students begin gearing up for a return to school. Like many of you, we’ve been busy this summer and are looking forward to a little R&R ourselves. With that, a first of two brief announcements: our “office” will be closed this coming Friday September 3rd for a long Labor Day weekend. We’ll see you again, ready and refreshed on Tuesday morning.

Our second announcement? We’re hiring! We’re looking for a fantastic Recruitment Marketing Coordinator to join our growing team. If you know someone looking for a fun and fast-paced startup job, please send them our way!

In the meantime, please find below your economic update for August. As always, keep the feedback coming. 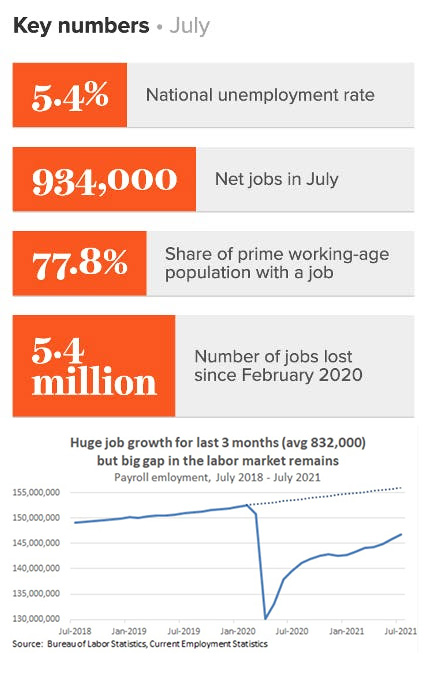 Economic recovery continues apace into August as the July jobs report saw the addition of 943,000 jobs to the US economy. This represents a significant increase over the revised June tally (938,000) and far surpassed the Dow Jones consensus projection (845,000). And while the rapidly-spreading Delta variant may not have had a significant impact on July’s report, it has certainly challenged economic forecasting. Estimates in advance of the report’s release ranged rather wildly: anywhere from 350,000 to 1.2 million.​

Unemployment also fell sharply from 5.8% to 5.4% since last month, notable as both the labor force participation rate (LFPR) and employment-to-population ratio rose – indicating that more people are finding work than are leaving the labor force altogether. Yet, economic recovery benefits are unevenly distributed across the US workforce. The COVID pandemic has had a disproportionate impact on persons of color and the contrast between unemployment rates, in particular between white and Black males, is stark. 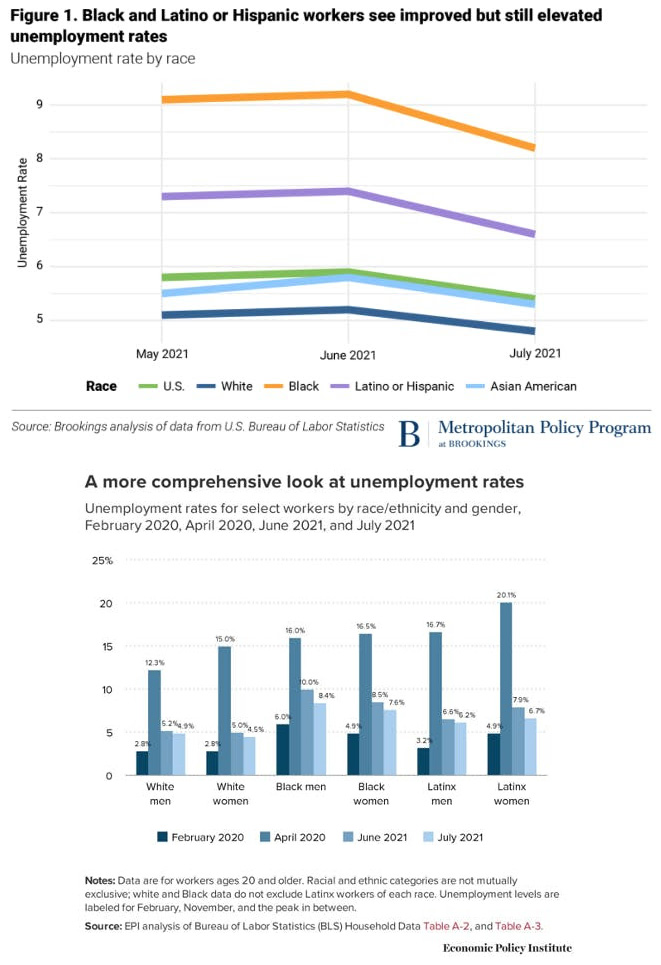 Sadly, while overall US LFPR did increase in July, the opposite trend has affected Black unemployment which fell due to people exiting the workforce, and therefore not counted as unemployed. In particular, young black workers are experiencing some of the nation’s highest unemployment rates.

What else for August?

CEO compensation has been a hotly debated topic across the last several months. Certainly, if you follow Gravity Payment’s CEO Dan Price on Twitter you’ve been receiving a steady drip of withering criticism across the past year and more. And given the many challenges of the last 18 months, US public opinion of the ultra-rich has trended more negative, particularly among younger generations. 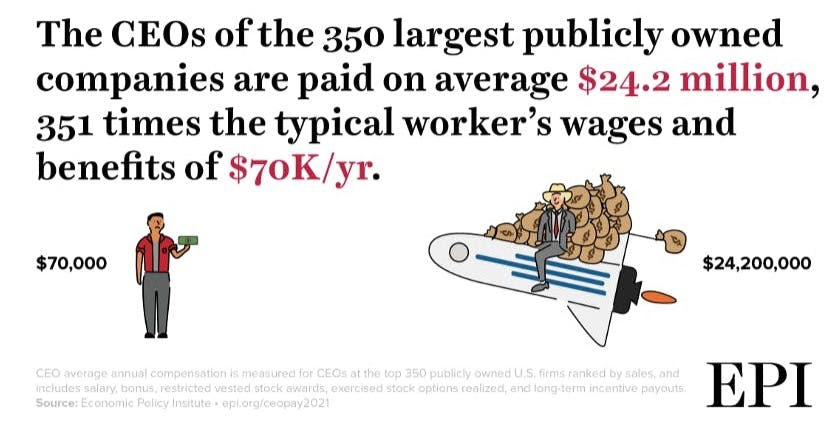 So what has been happening with CEO compensation in the last year? Stanford University, The New York Times, The Economic Policy Institute, The Associated Press and Bloomberg have all delivered recent analysis into executive pay. Here’s what they found:

While many Chief Executives did voluntarily slash salaries in 2020, most large organizations compensate CEOs on a “pay for performance” structure where salary generally makes up less than 10% of overall compensation. And while booming stock prices during the pandemic may have boosted the value of equity for some executives, companies hardest hit by the pandemic were the most likely to modify annual or long-term incentive plans. And when boards intervened, they were more likely to make adjustments to increase compensation rather than lower it, according to analysis by consulting firm Pay Governance.

I don’t think we’ve ever seen anything like this before in terms of the number of changes we’ve seen in incentive plans. – Shaun Bisman, pay and corporate-governance consultant at Compensation Advisory Partners in New York.

One example? At Foot Locker, when calculating the 2020 bonus for CEO Richard Johnson (and other top executives), the retailer elected to add $303 million in sales – justifying the adjustment as an estimate of the expected sales if the stores had not been closed for extended periods during the COVID crisis. As a result, Johnston earned an additional $3.8 million cash bonus for a total annual pay package of $12 million, a 30% increase from 2019 when the company had hit an all-time annual sales record. In the same year, the company furloughed nearly all of its workers without pay.

Many companies have defended their 2020 executive compensation plans, noting that much of the compensation for CEOs vests over several years, when stock prices are not guaranteed. And, in many cases, it may never be received if they fail to reach certain performance targets.

In truth, CEO pay receives relatively little scrutiny in a favorable economic climate, but during upheavals like that of a global pandemic, it receives far more attention, particularly when outsized pay is contrasted with cost-cutting measures like layoffs and furloughs. But lately, executive pay criticism has come from shareholders themselves who are increasingly voting against proposed executive pay structures, including at major corporations like Starbucks and Walgreens. In fact, compensation analysis firm Equilar found that nearly 1 in 6 S&P 500 companies holding shareholder votes since September 2020 have received less than 70% support for “say-on-pay” votes. As a benchmark, such votes generally receive more than 90% approval, and receiving less than 70% is often considered a failure. Last May, just 51% of Chipotle’s voting shares approved the executive pay packages, in contrast with 95% the previous year.

Although advisory and non-binding, “say-on-pay” votes are receiving more of Wall Street’s attention. And boards may do well to take note of changing shareholder and market sentiment on executive pay: Morgan Stanley found that between 2017-2019, stocks of companies with failed votes performed well behind the S&P 500 in the following year, suggesting failed “say-on-pay” votes may be a red flag that the stock could struggle.